The Stairway To Miracles

A visit to "Seal City"

Note: For best results, please read this series in the order presented in the accompanying left hand menu.

"Lessons of Oneness are all around us..."

Join me in a visit to "Seal City" and listen in as seals help us to ascend our Stairway to Miracles.

I am privileged to live in a nature-preserved community in Northern California where there are endless trails that wind through forests and along the rugged Pacific Ocean Coast.

Recently I went walking along the ocean bluffs and came across about 30 seals lying on a large ocean rock, lazily soaking up the sun. I stopped, sat on a nearby tree stump and observed them for about an hour.

What would I learn?

A few of them saw me, and curiously raised their heads to look at my strange non-seal appearance. And then, having found me uninteresting, resumed their lives.

I marveled at how they could seemingly do nothing. They would just lie there and, occasionally, some would plop into the ocean to play awhile. The playful ones eventually climbed back up onto the rocks to, once again, do nothing (my perception).

But were they doing nothing?

From the human perception, perhaps so. Human minds are forever active, always planning for some future event... or figuring out a way to improve their lives... or solving problems... or... or... or. Seals, by contrast, appear completely unconcerned with any of that. Their very nature allows them to lie on the rocks and just "be."

Do you know how to do that? Would you like the complete peace of just "being?"

I entered that peace in my 1988 spiritual experience. In that state, I didn't need to do anything... and it was the complete opposite of being bored. Love was everywhere, always expanding and dominating everything. It was exciting, stimulating and endless. I was outside the concerns of the illusionary world. I was just "being."

As I watched the seals I began to notice differences. Humans tend to do that. 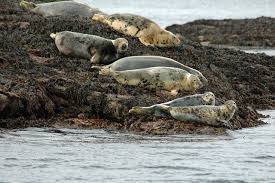 The seals were all about the same size (except for a few new pups) but they varied widely in color. Most of them were brownish but the shades of brown varied from light tan to very dark. Two of them were very white and one of the white ones had many black spots on it (like a dalmation dog). Two others were nearly coal black with splotches of grey breaking up the otherwise all black skin.

Humans seem to care about skin color and other "differences" in people. That's one of the world's problems. But the seals seemed completely unconcerned about this. They would play, lie next to one another or just "be" without such silly judgments. There was no evidence that seals cared about whether other seals were prettier, smarter, richer, better connected, etc.

Aaahhh, judgments. Humans have lots of them. Seals have none. Is there a lesson for us somewhere in "Seal City?"

At one point, a seal seemed to be having a problem. I don't know if it was ill or older but it was having difficulty moving off the rocks and into the ocean. Two nearby seals sensed this problem (without any apparent language) and came to the aid of the disadvantaged seal. They nudged it gently into the ocean (mostly with their noses) where it swam fluidly in its ocean home.

Humans also help others but not always with this instinctiveness. The seals acted out of a form of Oneness where this kind of loving assistance is natural. It is expected. It is love personified.

Lessons of Oneness are all around us, including Seal City and The Unseen Therapist. We need only pay attention to them.